See Sally Banes, Democracy’s Body. Judson Dance Theater. 1962-1964, Durham, North Carolina, Duke University Press, 1995, p. 93-97, excerpts : « Newpaper Event was choreographed by Carolee Schneemann. Schneemann had been making collages and paintings since the early 1950s, and, after graduate school in painting at the Uniersity of Illinois, she moved to NYC in 1961 with the composer James Tenney. Through Tenney, Schneemann met Corner (Philip) and Goldstein (Malcom). Tenney worked as composer-in-residence at Bell Telephone Labs in New Jersey, where he met Billy Klüver, a swedish engineer who was interested in avant-garde art, occasionally assisting artists with technical aspects of their work and making touring and financial connections between artists and the Swedish government. Through Klüver, Schneemann began to go to environments and happenings; she appeared in Claes Oldenburg’s Store Days in February 1962, and in May she created her own « display » in collaboration with Philip Corner, An Environment for Sound and Motions. (document/affiche, see Dan Cameron and Michael Rowe, « Interview with Carolee Schneemann », NYC, 27 February 1980, BCJP; Schneemann, More Than Meat Joy, Documentext, McPherson & Co., NYC, p. 23) She began taking dance classes with Arlene Rothlein, whom she met through Golstein, and Corner suggested that Schneemann join the choreography workshop then meeting at Rainer’s Studio. Then she first worked on Newspaper Event and a children’s fantasy unrealized until 1969, Banana Hands (see Dan Cameron and Michael Rowe, « Interview with Carolee Schneemann », ibidem, p. 25-32). (…) Schneemann used the word « concretion » to define her performances because she held that through gesticulation and gestation the « fundamental life of any material I use is concretized. » With dancers that gesticulation could occur in any part of the body as well as through the voice.

In Newspaper Event each of seven dancers was assigned body parts: spine, Arlene Rothlein; legs/face, Ruth Emerson; shoulders/arms, Deborah Hay; neck/feet, Yvonne Rainer; hands, Carol Summers; head, Elaine Summers; fingers, John Worden. Schneemann herself was « free agent/crawling. » The dancers used the assigned body parts as the source and focus of their movements. In a sense their goal was to create objects rather than to dance.

« The source of emphasis, of internal focus and projective insistence was to determine all functions or actions in relation and contrast to the overall movements of the body. Phrasing, duration, repetition, the « scale » of gesture, would all be improvised within the centralized and overlapping movements generated by the instructions. The ruminative, meditative attitude evoked in working concertedly, in making something with the hands seemed a basic sensory value rarely explored publicly. » (see Dan Cameron and Michael Rowe, « Interview with Carolee Schneemann », ibidem, p. 32-33) The performers entered with cartons full of newspapers. Schneemann brought in benches and stools. The dancers « unfold and throw newspaper cascades in the central area, fast as possible. Thickest amount of paper in the center, then outward… in a circular sweep. » Each dancer then followed his or her instructions. Rothlein and Emerson were to use horizonality; Hay was to use the refrain « I’ll huff and I’ll puff both as energy and in her voice. Rainer’s intructions involved making a huge pedestal out of newspapers, becoming tiny and then large, engulfing someone. Both Carol and Elaine Summers were instructed to « make yourself a little something to wear from the newpapers. » Carol Summers had a vocal refrain, « That’s beautiful, » while Elaine Summer’s line was « I need breakfast. » Worden’s actions were meant to be private and self-indulgent, and if anyone came near the « little something amusing » he was making, his response was to call them « you little prick » or « you dumb ass. » Schneemann, as the free agent, timed the action, which lasted for ten minutes, and also planted flags on performers, crawling with the flag in her mouth to do so. (see Dan Cameron and Michael Rowe, « Interview with Carolee Schneemann », ibidem, p. 33-35)

Newspaper Event was based on the idea of « an organism interchanging its parts (phagocyte). » Schneemann outlines five principles in her construction of the piece :

« 1) The primary experience is the body as your own environment. 2) The body within the actual, particular environment. 3) The materials of that environment – soft, responsive, tactile, active, maleable (paper…paper). 4) The active environment of one another. 5) The visual structure of the bodies and material defining space. »

Schneemann had watched the dancers in the workshop using random movements, chance methods, and nontechnical movement, but was disappointed that they seemed to be working as autonomous entities even in group dances. Her response, in Newspaper Event, was to provide a framework within which they could interact physically and spontaneously.

« I wanted touch, contact, tactile materials, shocks –boundaries of self and group to be meshed and mutually evolving. Newspaper Event was a first attempt to provide specific instructions through which contact and improvisation could activate neglected thresholds of awareness. Individuals would create their own activity and its momentum, while responding to and incorporating the « intrusions » and unexpected conjunctions with others… There was no underlying basis of abstract structure or rule, no-predetermined movement patterns. » (ibidem, p. 33)

« Did you ever see a dance accompanied, decorated and – in a sense – dictated by the shredding of newspapers? I am sure I have either, but in this program Miss Schneemann had a number of dancers involved in what was titled Newpaper Event, and I assume she thought what they did was dancing. Perhaps it was.

« In any case, it was surprisingly intriguing visually, and it actually – if accidentally – built to a climax despite its improvisational character. Each dancer had been given an action-motif to perform as he or she went through the business of tearing up the papers and romping in them, and these motifs collided in many interesting ways.

« One girl, for example, rolled on the floor, another went through the motions of dressmaking with papers, a man knelt on the floor, and from time to time dancers jumped on his back. Other dancers had other characteristic movements. Unfortunately, they had also been given motifs to speak at random, and these weakened the impact of the whole. » (Hughes, « Dancers Explore Wild New Ideas », see Sally Banes, Democracy’s Body. Judson Dance Theater. 1962-1964, Durham, North Carolina, Duke University Press, 1995) 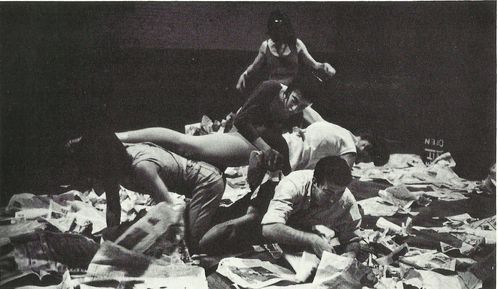 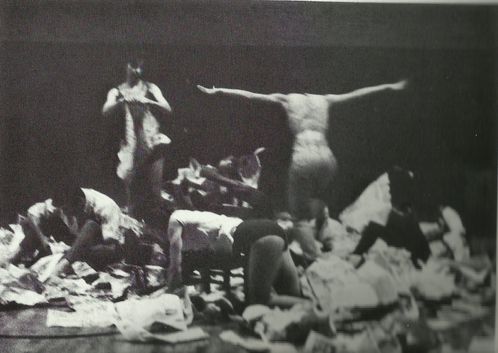