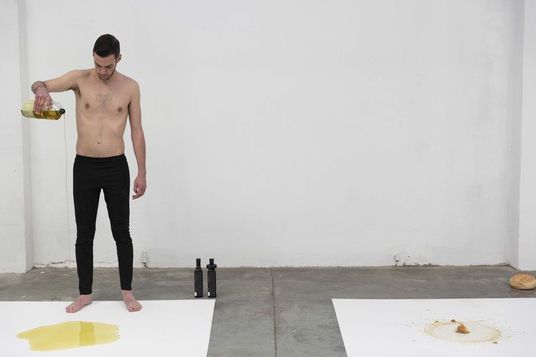 Action: The audience encounters a space with two white rectangles painted on the floor next to each other. The artist enters the space and assumes a position behind the first right rectangle. By kneeling at the edge of the rectangle, he pours a small quantity of olive oil at its center, followed by the pouring of balsamic vinegar, in order to form a circular spill. A loaf of bread is cut and dipped into the spill, attempting to mix and absorb the liquid formation through an escalating circular gesture. Once the liquid has been absorbed, the artist places the bread loaf at the center of the circle left behind as a trace of this action. By assuming a position behind the second left rectangle, he pours a bigger amount of olive oil at its center, until the two-liter bottle is emptied. The artist takes two glass balsamic vinegar bottles and straps them onto the upper part of his arms by using black tape, with the bottles’ tips facing downwards. By having his arms raised, he unscrews both cups and slowly lowers them, in order to allow for the first amount of vinegar to be spilled onto the rectangle. The artist follows an escalating gesture of raising his arms over his head and down again, until the bottles’ content is completely emptied. By kneeling again at the edge of the rectangle, he places the whole bread in the middle of the spill and slowly rest his face onto the bread. Through a circular head movement the artist attempts to mix and absorb the liquid content from the rectangle’s surface. When this process has reached its peak, the artist gets up and stands in-between the two rectangles. He takes the loaf of bread that was left at the center of the first right rectangle and attempts to place it into his mouth. During the process of chewing, the artist establishes eye contact with each member of the audience, until the bread loaf is completely swallowed, and then exits the space by passing through.