Description of action: I am in old converted factory house of the family Deves. Inside I start putting gold leaf on my face with water and make a gold mask. The palm of my hands are covered in gold as well. I exit the house into street with a plaque. I start running between 2 point, at each of them suspends goat’s hearts with iron nails in them. I run in between them and start taking off the nails with my mouth one by one, running to put them on the other and taking them off.

Sometimes I choke on the nails and vomit them. This action is repeated until I get plaque and put it on the wall of the house. The street is baptised as Passage Deves.

Concept: The performance brings the journey of the historical landmarks left by the Deves family in St Louis, a family whose generations faught for human rights & equality, brought political changes and acted as pioneering community-developers. It make a hommage to the family today and to the local residents of St Louis who share and remember this history.

The 2 suspending hearts symbolising the heart of forgiveness and strenght, deals with the parental figures in Alice’s story (see the lithography series of Alice in Wonderland (alice-in-wonderland-for-the-22nd-century. html), and is activated by its metonimy. The nails act as metaphor for the release of spirits, and questions history and representations of nations composed by abstract constructions of Western anthropological knowledge stereoptyped through imaginary modern voodoo practices. The hearts activate as the release of guilt and the sorrow of the mother and the spell that the people and its history are subjected to. A gesture of thanks, a willigness to transform. 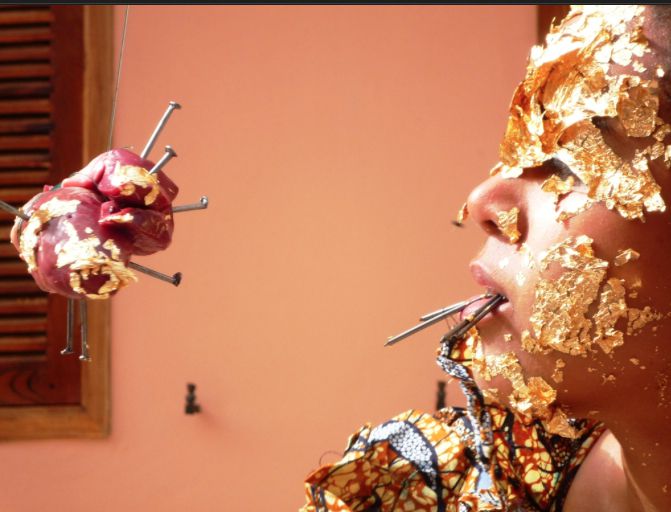