Interactive performance that pays homage to the maritime explorations of Christophe Columbus while reflecting on more than four hundred years of conquest colonization and assimilation of indigenous peoples in the Western Hemisphere. Based on the ancient Aztec legend of the return of Quetzalcoatl and on the writings of Bolivian writer and historian, Alcides Arguedas, the artist constructs a performative narrative that allows him to explore racial, social, religious, ethnic, and even amorous convergences.

The performance is divided in three segments: Voyage, Contact, and Submission. Each part invites the public to actively be engaged with the artist by repeating a short text, leaving a mark on his body, and accepting an offering. In Voyage, the body is used as a navigational tool while reciting the coundown of a timeline extracted from Columbus’ diary. Contact is established by having the audience slap, touch or hit the artist leaving a red mark on his semi-naked body. In Submission the artist washes his bloody figure while repeating in Quechua and Nahuati ‘‘motherland-blood-brother,’’ he procedes to bottle with his mouth the red water, and after having labeled the various jars with names of commodities original from the Americas, he offers them to the audience. 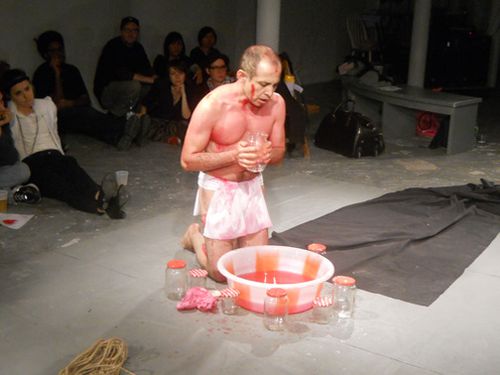