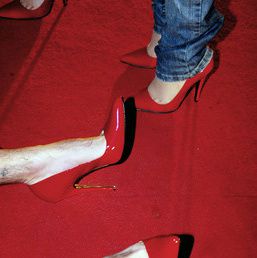 Mariuccia Pisani (1973, USA) lives and works in Pescara, Italy, and New York. Her works encompasses performances, installations, photography and video and frequently originate in an autobiographical background. The artist often uses her own body as a tool for reflecting sexualised society and culture (in works such as Helmut Newton is Dead, 2006).

In an empty space, created especially for this occasion, with a few scattered mirrors and the scent of a perfume, the audience is asked to wear red stiletto shoes, regardless of their gender. Power was a participatory happening: the audience members become the performers and the objects of attention at the same time. There are (some) women who are comfortable with wearing high heels, and there (some) are men utterly unaccustomed to it. The gendered sexual attractiveness associated with high heels becomes confused and applied to everyone, humorously highlighting the role of fashion in gender relationships. Performance: Spazio 8, Milano, Italy, R March 2008, ex-churche of Sant’ Angostino, Citta Sant’ Angelo, Italy, 12 April 2008.