Performed  in the MOCA series, All Night Sculptures. Smith created a boudoir environment and invited individuals one at a time to enter and interact with the artist. This could include conversation and affection.

« MR: Can we begin by talking about Feed Me piece which you did earlier this year for the San Francisco Museum of Conceptual Art? How was it set up? It lasted all night until dawn and you spend the time sitting nude in a room?

BS:  Yes. There was a mattress and a rug and pillows and many things around me, and incense was burning, and it was warm. There was a heater.

MR: As the piece was called Feed Me, what sort of feeding did you get out of it?

BS: On a lot of levels. There were body oils and perfume in the room so that one person gave me a back rub. There was food and wine they could give me. There was music, flowers, shawls and beads and things like that. There was tea, books and grass. That is about all. And so a person came into the room, he could choose anything he wanted to use as a medium of interaction, and it was all a source of food – food meaning sustenance. This could include conversation and affection.

MR: Did you have any limits on what you would allow to happen?

BS: I didn’t want anymore who wasn’t positive, whose emotions weren’t positive towards me. I would have felt very defensive about that, and I would prevent any action which I did not consider food.

MR: Did you check with people afterwards about how they felt?

MR: How do you feel about the piece in terms of image of women? The courtesan and odalisque are obvious images that come to mind.

BS: Well, for one thing, that’s an image that either has been real to some people, or in one way or the other has been part of their fantasy life. And then there are so many levels of real life that border on that kind of activity. So the question is, not only if it exists in anybody’s mind, but the fact that it exists on so many levels. So that’s how I feel about it in terms of women’s lib. It’s a reality which one must confront. For me my art accomplishes my own liberation. It makes me stronger. For others it acts as any art does, a confrontation that they must face on their own terms. I am pointing to things that are real, which people may or may not like to face…

MR: Shortly after the MOCA piece, you did a very different type of piece – Pure Food.

BS: Yes. Out in a vacant lot in Costa Mesa – a large field really. I sat in one spot. I just sat there for eight hours. For as long as I was able to, I meditated, which turned out to be maybe two, two and half hours. And from then on it was a matter of passing the time and noticing the different directions my attention would take. One span of time, I slept. » 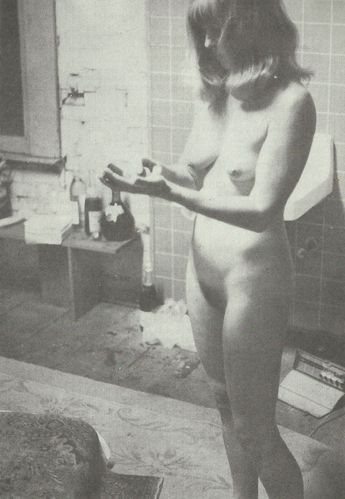