(Antin) states that the three pieces in the exhibit… are concerned with « a re-investigation of art history and methodology by redefining the old terms so precisely as to throw new and relevant light and, in fact, make them useful again ».

In the « Painting » segment of the exhibit, the artist shows a videotape of about 35 minutes length titled « Representational Painting ». …she applies cosmetics, changes into a chic blouse and a perky hat, prepared to present herself to the world…

The second work is « Sculpture », titled « Carving »…as in the classical tradition the piece is carved one layer at a time. Through a program of dicting, the artist gradually whittles down her body, a layer at a time. Antin was photographed unclothed daily for a month – front, back and each side…

In the « Drawing » portion of the exhibit, the work is titled « Domestic Peace ». It consists of 15 xeroxed pages on which… Antin recorded manually, but almost as an oscillograph would, the reactions her mother had during conversations that had been pre-planned and were carried out without her knowledge of the under-the-table sketching that continued throughout the project.

« The actions in this show are : 1) « a strict regimen of diet and exercise » resulting in the loss of nine pounds in thirty days – docummented by 120 photographs, four view a day, of Antin in the nude ; 2) a face-cleansing and make-up session – documented by a sharp, professional videotape ; and 3) a ‘forced’, extended psychological encounter with her mother – documented by a kind of psychic electrocardiogram, ranging from restful pleasantness (pleasantness restful ?) to hysteria. » 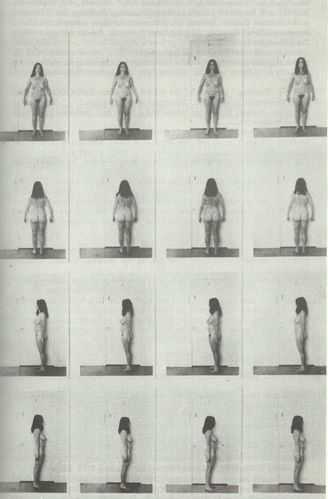