The photos document performances which he took place in the years 1968-72 (73?). For each performance the number of participants was limited, because intense interpersonal perception is only possible in a small circle of people. Each situation should result in dissolving barriers between passive spectators and active performers. There should be only participants. Each performance has a central figure, who functions as a starting point and the goal of the activity. What the central figure wears provides a means of communication among the participants. The performer’s central position on which concentration is focused places him in a kind of “initiation ritual.“ The process begins before the actual performance. The performer’s personality, his idiosyncrasies determine the shape of a particular performance. The basis of the performance, then, is a specific relationship. During this relationship a framework of desires, fantasies and projections becomes apparent, suggesting particular ways for the presentation of a person. The “garment“ is constructed on and fitted to the body of the person who will wear it. As his body is fitted into this mould and as he wears it, time after time identification begins to develop. This psychological mechanism is essential for the performance. During the performance the person is isolated, separated from his everyday enviroment (in some pieces the performer is naked). This specialised area is used to further self-perception. These performances, then, are attempts at new models of interaction rituals. » (see Lea Vergine, p. 114)

Ideas of touch and sensory awareness are explored in this work. Horn has described how wearing these gloves altered her relationship with her surroundings, so that distant objects came within her reach: « the finger gloves are light. I can move them without any effort. Feel, touch, grasp anything, but keeping a certain distance from the objects. The lever-action of the lengthened fingers intensifies the various sense-data of the hand; …I feel me touching, I see me grasping, I control the distance between me and the objects. » Implicit in the work is the idea that touching makes possible an intimacy between our own body and those of others. (2004) 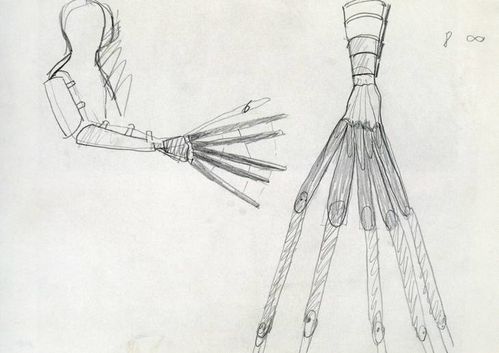 — « An instrument to extend manual sensibility. The finger-gloves are light – I can move them without any effort – feel, touch, grasp anything, but keeping a certain distance from the objects. The lever-action of the lengthened fingers intensifies the various sense-data of the hand. The manual activity is experienced in a new operational mode: I feel myself touching, I see myself grasping, I control the distance between me and the objects. » (see Lea Vergine, p. 115)