(This may or may not have been in Venice) People showed up at a gallery, having received invitations for a reception. The place was empty. Then Burden and two friends came in. One filmed while the other shot Burden in the arm. This was during the Vietnam war, which probably had a lot to do with the conceptualization and meaning of the piece.

« [Chris Burden]: The younger artists out here are not dealing with drawings and paintings anymore. They’re dealing with ideas. I mean here’s a media city, and the native language just isn’t painting and such; it’s television, films, the media. This place is about reality and illusion, sanity and insanity. There’s just total schizophrenia as to what is real and what isn’t, but it’s clear here that a lot of things are make-believe. So it becomes increasingly apparent that you can affect people with intangible ideas. You can make a little 16 mm film that’s, say, 30 seconds long, and by running it over and over you can sell a million Chevrolets a day. Suddenly it seems a little bit ridiculous to be making something like a 36 foot painting. Or take my getting shot in the arm, which is the big piece I’m famous for. I was able to do a piece of sculpture that didn’t any material except a riffle, that was over in a split second and that basically existed by word or mouth. And that’s, I think, what attracted me –  not getting shot particularly, but the whole conciseness of the thing. In essence that’s giving the shaft to MGM, with their fancy sets and million dollar budgets. Phillip trotted across the room and shot me in the arm for one millisecond: big deal. But in terms of the media – and that includes word of mouth –it worked. » 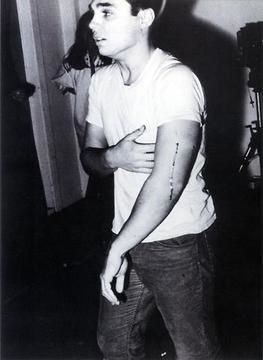