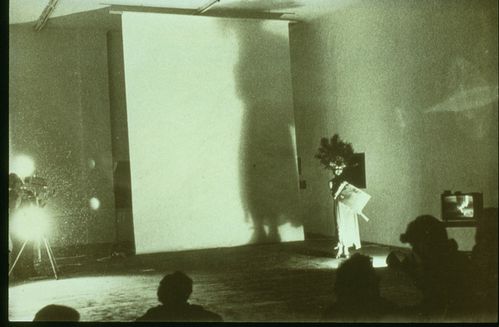 First performed in 1973 at the Toselli Gallery, Milan, Italy.

I wanted to depersonalize myself.

I wrote that script after I performed the piece. The material didn’t have a hard exterior structure, as most of my films and tapes do. It developped day by day and I throught of it in terms of a musical score in which sound and image follow one another in a certain rhythm. Nevertheless, certain themes did predominate, such as the idea of the opposite light and dark, black and white, sun and moon, and finally left side and right side in relation with the monitor – the monitor does not reverse the image as the mirror does… » (see Lea Vergine, p. 123)